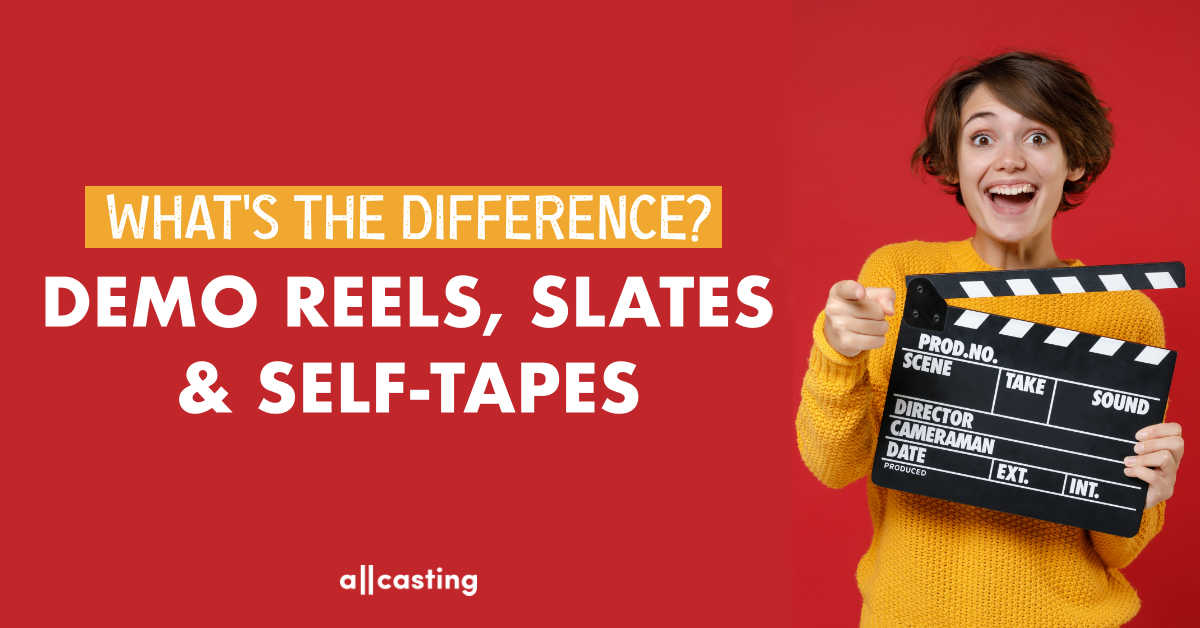 If you’re new to the entertainment industry, certain terms can get a bit overwhelming. To make things a bit easier, we’re here to help you better understand what these terms mean, and how you can utilize them to your advantage in showbiz.

Due to the global pandemic, industry terms like Demo Reels, Slates, and Self-Tapes have been making quite the appearance. Find out what these terms mean, and how crafting each one of these items can help you land the dream gig that you’ve had your eye on.

If you’re an actor, a demo reel is absolutely essential to landing a gig in this industry. Consider it as a video compilation business card, letting casting professionals know exactly who you are, what your skills entail, and whether or not they should hire you for the role.

A demo reel (you may also know it as a “showreel” or “sizzle reel”) is a video collection of your best performances, typically compiled in a one- to two-minute-long video.

When searching for talent, professionals involved in the project will view thousands of demo reels to decide whether or not to pick you.

Demo reels have become accepted across different industries as well. For instance, you can create a voiceover demo reel, capturing your best work in an audio file while applying the same standard format as a traditional demo reel (and the list goes on).

Tip: Make your demo reel great by starting with your strongest performance, submitting high-quality footage and audio, and displaying your most recent appearance in those shots as well.

Bonus Tip: Make sure to include a slate that includes a clear visual of your name, headshot, and contact information.

Extra Bonus Tip: When compiling your demo reel, be sure to include a wide range of performances, instead of just focusing on one project.

Everyone deserves to have their introduction. In the entertainment industry, that introduction is referred to as a slate.

Slating isn’t particularly difficult, but it does hold a lot of weight on how you will be perceived by Casting Directors and whether or not your first impression becomes the last.

Although the information you should display in your slate may be different from project to project, for the most part, the most vital information to include is your name, height, and location.

When filming your slate, make sure to mention these key points after saying your name:

Tip: If you’re required to film a full-body slate (typically necessary for self-tapes), you can do so by starting with a medium-body shot, saying the main points, and zooming out to a full-body shot before jumping into your audition.

Bonus Tip: When filming your slate, try to combine bits of the character you’re auditioning for with your own personality.

Traditionally speaking, an actor would only be considered for a part by submitting a headshot. After the headshot is submitted, the actor would then be invited to audition in person or submit their videotape through the post office (known as snail mail).

Due to the global pandemic, self-tapes have changed this traditional method (one of the most drastic changes to the industry in the past decade) by allowing actors to audition remotely, and for more parts at a time.

A self-tape is a pre-recorded video audition that’s submitted to the casting director, or the casting team. In this video audition, you should read parts of the script (also known as sides), edit your footage, and submit it electronically.

Typically, a self-tape may be required once the casting director considers your headshot and demo reel first.

Tip: Film your self-tapes using a solid, neutral-toned background to bring the attention back to yourself. Avoid using patterned wallpapers or bright colors, as they can be distracting for the casting directors. Also, make sure to film it in the medium close-up format (chest to just over the top of your head), and avoid wearing clothing that blends with the background.

Bonus Tip: Take care to adjust your audio to the best possible quality that you can. This may mean keeping your dog away from barking during your video or having a relative help watch your kids while filming.

Extra Bonus Tip: Only slate in your self-tape if the casting team or the casting director requires it. If they do not, leave your slate out of the self-tape.

Now That You Know

We hope that you’ve found the answers to the question at hand and have a better understanding of the differences between Demo Reels, Slates, and Self-Tapes.

Remember, that the quality of your video content matters the most - and these videos can easily be made on your phone at home, achieving the same great results. As long as the video is clear and easy to understand (and hear), you should be good to go.

Creating this content will most certainly help you stand out from the crowd and be considered more seriously in the industry.

Naturally, as with anything else, the more practice you have creating your demo reels, slates, and self-tapes, the better they’ll become.

Only one question left: Are you ready to start applying and auditioning?

Join allcasting, and submit your applications to casting calls today.