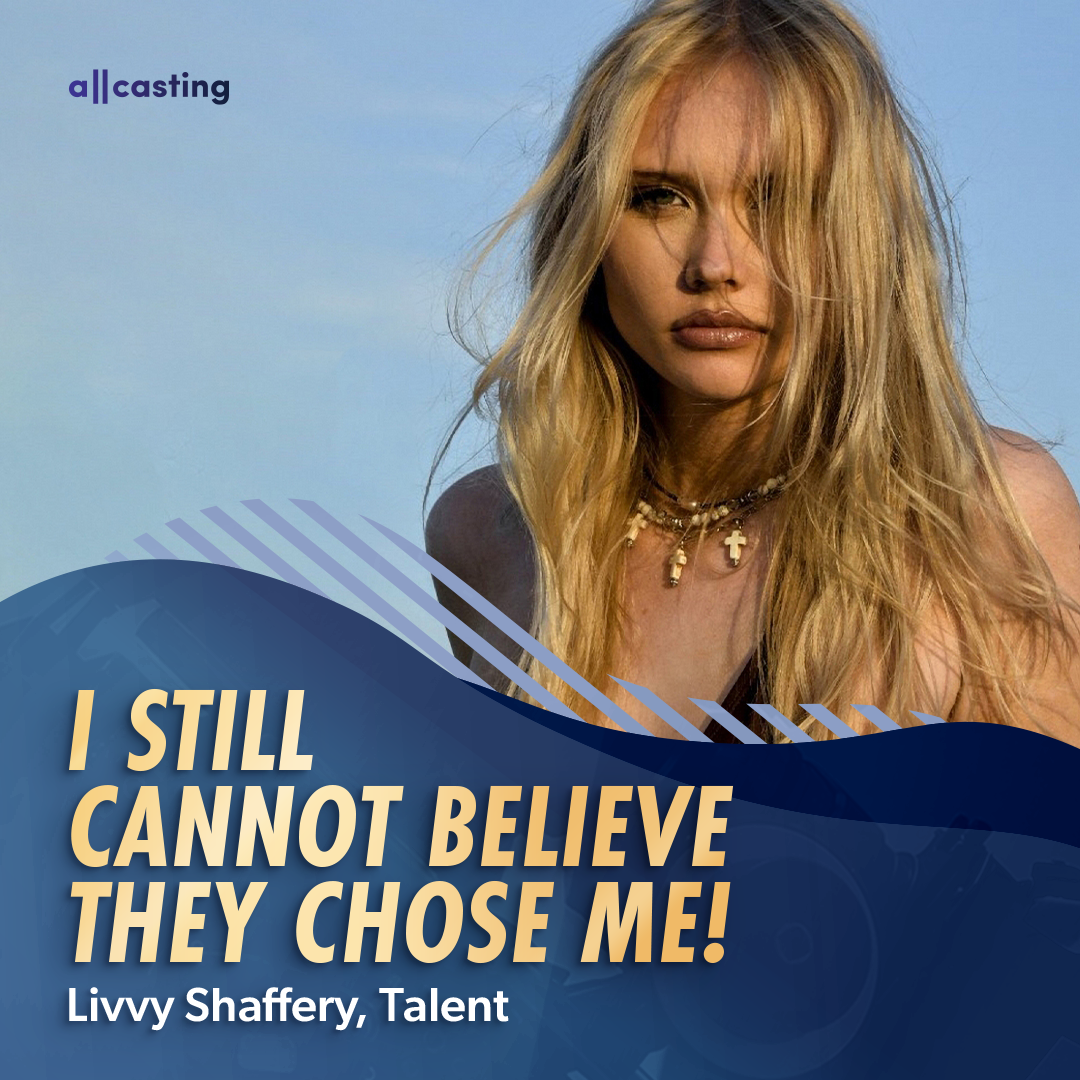 Livvy is an 18-year-old actress and model who has already participated in two major projects through allcasting. One of them is a lead role for an Amazon feature film!

Tell us about yourself. How and why did you decide to pursue a career in acting and modeling?

Hi. My name is Livvy Shaffery. I am 18 years old and have been a model since age 12. I began acting as a spin-off of modeling at age 14. Both modeling and acting came naturally to me, and I always felt comfortable doing it.
I have always wanted to pursue this career as a child. My close friend is a professional model; she always told me I have a model look and should apply to agencies. And so I did.
I applied to one of the top children's modeling agencies, and they accepted me. They only take a few, so I was very lucky. I have never looked back.

Have you ever gone on an audition before joining allcasting? How did it go?

I went to some modeling auditions through my agency, but they didn't work out. I was either too tall or too old for those as they were geared more toward younger kids.
I like allcasting because I can actually send the jobs my information, and If I am not what they are looking for, it saves us all time and money. I can also choose which brands I want to work for and represent.

How fast did you manage to go for an audition after joining allcasting?

I started applying immediately on allcasting and received responses straight away for auditions. One was a reality show in Atlanta, but they wanted me to fly out the following day, which wasn't possible. It was awesome to get a response that quickly, though. I have to say that allcasting is better than a few other places I have joined for casting calls. I find that allcasting has more prominent names and brand listings. In my opinion, others have more independent, smaller clients.

How long have you been a member?

I have been a member of allcasting for almost a year.

Do you prefer modeling or acting? Why?

I prefer modeling right now because I have a lot of experience in it, and for me, it is easy.
Acting is more challenging because I don't have much experience, and the competition is greater. With modeling, I feel they know what they are looking for, and it is easy. With acting, they would only find out if you're suitable when speaking and acting out a role. Acting is more challenging because you have to showcase your talent.

What was the best acting experience you can currently relate to?

I have had two major acting jobs, which are equally relatable.
My first major job was last summer when I was cast in a lead role in a feature film on Amazon Prime.
The second was a documentary for a major cable network. That one should be out in the fall, and I am not allowed to announce it yet. I cannot wait until the trailer is out. I had no idea they were going to have me shoot the trailer. That was super exciting.
And I got here on allcasting!

Your recent review mentioned that you worked on a documentary film. Can you tell us more about it

I am not allowed to announce anything about it yet, but I can tell you that it is for two major cable TV networks, and the Producer is huge! He is well known, and I am so excited. I still cannot believe he chose me! It will be released this fall. As I mentioned before, I discovered that I would be shooting the trailer on the second day of shooting. I am so excited to see it. Please follow me on Instagram @Livvy_s and IMDb Livvy Shaffery so I can update you on the release.

Share some of your best tips on how to get ready for an important day!

Some tips that I feel are the most important is to get a good night's sleep. If you don't, try to at least nap in the car if someone is driving you (which I strongly encourage).
Having a support system would take a lot of stress off of you. For me, it is my parents. They enjoy taking me everywhere.
I also think it is essential to eat and drink enough. Low blood sugar causes you more stress and anxiety if you are nervous. You do not want to be dehydrated going to a job. You perform your best when well-rested, hydrated, and not hungry.
Another tip the day of is just to be yourself. Relax and enjoy the experience. Make sure you ask if you are allowed to take behind-the-scenes photos and video. I find that everyone allows it, but they will probably ask you not to release it until they tell you you are allowed to.<br>

Any advice to new talents in the industry?

I have what I believe is important advice. Never give up. Whenever you are turned down or said no, think of it as being one step closer to a yes. Take the negative with a grain of salt. I cannot tell you how often I was told that I needed to lose weight or clear up my skin. It never changed me or made me feel bad. I grew a thicker skin, and I just laughed at it. Eat that large chocolate chip muffin as I did while on my way to shoot a beach movie in a swimsuit.
Even if you don't want to apply for background roles... please do it! I have applied for a background role in this beach movie in Brooklyn because it was close, and I had nothing else planned and thought it would be fun and a great experience. Guess what? I got a call back saying they liked me for a lead role, not the background.
You never know what a director or producer is looking for, so apply to everything big or small. Take the No's because one day, it will be a yes!

If you could talk to your younger self, what advice would you give?

If I could give my younger self advice, it would be not to get upset in middle school when the kids make fun of me for being a model. Kids can be mean and jealous. Don't hide and be embarrassed about what you love to do. Embrace it and just be yourself.